[This commentary, “GOP Cuts Are Moral Challenge for America,” was published on Commonwealth Magazine’s website on March 14.]

THE BIG NEWS IS, of course, Monday’s “score” from the Congressional Budget Office detailing that the House Republican bill to repeal and replace the Affordable Care Act/Obamacare will result in 14 million Americans losing health insurance by 2018 and 24 million by 2026.

Before that, something else caught my eye from the Bangor Daily News. It’s a blog post from a woman named Crystal Sands who writes about how the ACA enabled her and her young family to take a chance and find a new life as farmers. Her post, “The ACA makes a simpler farming life possible for our family,” says this: 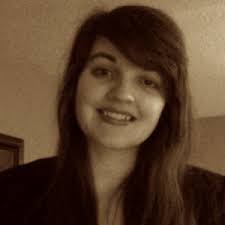 “The ACA has helped me to become a better mom, a better wife, a better teacher because I am not so overworked, and it has made it so I can learn to be a farmer. I’m also just a better person. I’m not sick and overworked. I’m more patient and more kind and more helpful to everyone. And this is my story. There’s so much potential here to make lives better. There are many people, including many farmers, who depend on the ACA. I hope we don’t lose sight of that.”

And now, CBO’s Cost Estimate of the American Health Care Act. Bottom line — $894 billion in tax cuts financed by $1.2 trillion in cuts to Medicaid and to subsidies/tax credits for private health insurance. Those cuts will produce an increase in numbers of uninsured Americans of 14 million by 2018, 21 million by 2020, and 24 million by 2026. Of the 24 million, 14 million will lose Medicaid and 10 million will lose private coverage, employer-sponsored and individual. END_OF_DOCUMENT_TOKEN_TO_BE_REPLACED

On March 14, the Committee for a Responsible Federal Budget (CRFB), a bipartisan federal budget watchdog group, released an economic analysis of the recent health proposals made by Republican Presidential candidate Donald Trump.  Their key findings:

“Donald Trump’s plan to repeal and replace Obamacare would cost nearly $500 billion over a decade, or $270 billion incorporating economic growth.

“The plan would nearly double the number of uninsured, causing almost 21 million people to lose coverage.”

To my knowledge, this is the first serious and independent economic analysis of any Republican or conservative health reform plan released since the Affordable Care Act (ACA) was signed in 2010.  It’s not a pretty picture.

In addition to “completely repeal(ing) Obamacare,” Trump’s proposal would:

END_OF_DOCUMENT_TOKEN_TO_BE_REPLACED

Below is an op-ed I wrote late last year for the Milbank Quarterly, published today.

Once upon a time, I believed that efforts to repeal the Affordable Care Act (ACA) would wither and die once the ACA’s major Medicaid and private insurance expansions became effective on January 1, 2014. After all, opponents had let Senator Ted Cruz (R-TX) trigger a 3-week federal government shutdown in October 2013 in a desperate final attempt to thwart the expansions. Over the course of 2 open enrollment periods, between 2013 and 2015, as many as 17 million previously uninsured Americans obtained coverage. Surely the worst was over. Now I am not so certain.

Since 2010, Americans have witnessed 3 near-death experiences relating to national health reform: first, the election of Scott Brown (R-MA) to the US Senate in January 2010, ending Democrats’ 60-vote filibuster-proof majority; second, the US Supreme Court’s decision in June 2012 upholding the constitutionality of the ACA writ large; and third, the November 6, 2012, federal elections in which a victory for presidential candidate Mitt Romney would have augured substantial repeal. By this standard, the October 2013 government shutdown and the 2015 Supreme Court case, King v Burwell, were faux near-death experiences, not the real thing. END_OF_DOCUMENT_TOKEN_TO_BE_REPLACED

[Note: This post was first published on the Health Affairs Blog.]

For the 61st time since 2011, Congressional Republicans are moving legislation to undermine and dismantle key elements of the Affordable Care Act (ACA). This time, though, will be different.

First, this will be the first time Republicans will use the budget process known as “reconciliation” to advance repeal. Using a budget reconciliation bill prevents Democrats from filibustering the legislation in the Senate, meaning only 51 votes are needed for passage in expedited debate.

What’s In The Reconciliation Package?

The key elements in the legislation, developed by three House Committees (Ways and Means, Energy and Commerce, Education and the Workforce) including: END_OF_DOCUMENT_TOKEN_TO_BE_REPLACED

Now that King v. Burwell has been relegated to history’s dustbin, let’s return for a deeper dive into the June 2015 report from the Congressional Budget Office (CBO), “The Budgetary and Economic Effects of Repealing the Affordable Care Care Act,” because much juicy and compelling detail has been ignored.  See my original article here.  Let’s start with this table, an earlier version of which (without 2016-25 numbers) I created for my 2011 book, “Inside National Health Reform.” 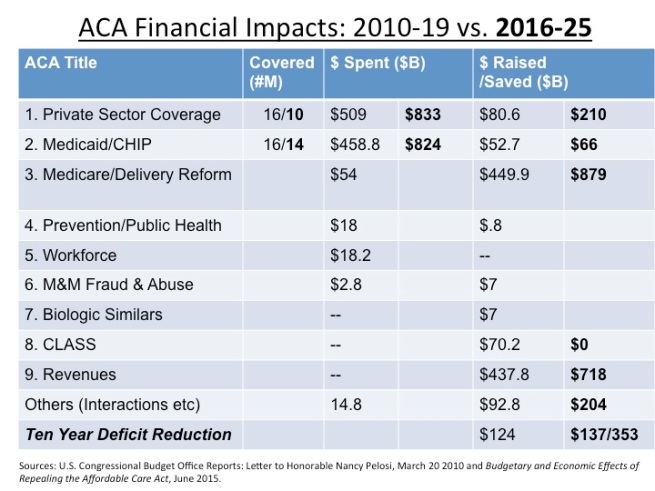 The table contrasts ACA spending and revenues as calculated by CBO in March 2010 (when the law was signed) for the period 2010-2019 with brand new CBO estimates released last month for 2016-2025 (in bold).  Not all items in the 2010 analysis were included in the 2015 version, though the biggies are.  The table shows costs/spending and revenues/savings according to each respective ACA title — I created both versions using CBO data.

First, look at the projected reductions in numbers of uninsured Americans because of the ACA.  In 2010, CBO expected the ACA would lower the nation’s uninsured by 32 million by 2019, half from private insurance/exchanges and half from Medicaid.  In the 2015 report, that number is 24 million.  Eight million fewer insured Americans — a 25% drop(!), and I’ve seen no comment on this.

Third, let’s look at the final column that includes ACA financing in the form of: 1. Title 3’s Medicare spending reductions/savings ($879B); 2. Title 9’s new taxes on high income wage earners, and on drug, medical device, and insurance companies ($718B); and 3. Title 1’s employer and individual mandates ($210B), plus others.  The chart shows that Title 3’s Medicare cuts and Title 9’s new taxes pay for the Title 1 and 2’s insurance coverage expansions.  If you understand this, you get the ACA’s essential financing formula.

Because of missing data, all these numbers don’t add up to the deficit reduction number at the bottom of the table, though there’s enough to show the essential picture.  As detailed in my June CBO post, in 2010 the CBO projected that the ACA over 10 years would reduce the federal deficit by $124 billion; an apples to apples comparison now shows deficit reduction at $353 billion (2016-25); when including the Republicans’ voodoo economics “dynamic scoring,” this reduction drops to $137 (with a ridiculously wide variance).

There’s so much more compelling detail; here are a few important nuggets:

Some wonder, how could Republicans, given the chance, ever finance repealing the ACA?  Here is the answer.  If you repeal the entire ACA, except for the the $879 billion in Medicare reductions, that bill would reduce the deficit.  A Republican President, working with a Republican-controlled Senate and House, using budget reconciliation rules which cannot be filibustered and only require 51 votes, could make that happen.

Inconceivable?  Consider this.  Twice, US Senate Finance Committee Chair Orrin Hatch (R-UT) and US House Commerce and Energy Chair Fred Upton (R-MI) have released the “Patient Choice, Affordability, Responsibility, and Empowerment Act” (Patient CARE) as their plan to repeal the ACA.  Read their release and then click on the full description and read footnote 3 on page two and here’s what you will find:

“All provisions of PPACA and HCERA are repealed except for the changes to Medicare. Medicare reforms should be considered in the context of reforms to improve Medicare and prevent its insolvency.”

[PPACA and HCERA are the two statutes that, together, constitute the ACA.]  The “changes to Medicare” — that’s the $879 billion.  If you don’t think Republicans have a strategy to repeal the ACA if they win the White House and hold the Senate in 2016, think again.

My favored definition of “health policy wonk” is someone who reads health reports from the Congressional Budget Office AND enjoys it.  Guilty as charged.  Last Friday’s new report, “Budgetary and Economic Effects of Repealing the Affordable Care Act,” was enlightening and fascinating.  It will be a benchmark document during the coming two years of debates over the ACA’s future — and required reading for my students this fall.  Lucky them!

This report is already a fountain of numbers thrown around by both parties — and it reflects the changing politics at CBO under Republican control of the U.S. House of Representatives and the Senate.  What are the key numbers?

So there you have it.  Repealing the ACA, the premiere policy goal of just about every Republican House and Senate member, will dramatically increase both federal deficits and the numbers of uninsured Americans in a report signed, sealed, and delivered to Capitol Hill by Republicans’ newly appointed CBO Director Keith Hall. Hall replaced the prior highly respected CBO Director Doug Elmendorf (who was just announced as the new Dean of the Kennedy School of Government at Harvard beginning next January). END_OF_DOCUMENT_TOKEN_TO_BE_REPLACED