[This column is reprinted from the Commonwealth Magazine website.]

GLOBAL HEALTH EXPERT Michael Reich says that the acid test of any national health reform comes when a new national administration takes over. Only when a new president or prime minister assumes power can we judge the stability and staying power of any health system reform. In the US, that’s this moment. Since November 8, we’ve been learning what parts of the Affordable Care Act (ACA) have staying power, which do not, and what’s uncertain.

Right now, after Friday’s demise of the Republican repeal and replace plan, the American Health Care Act (AHCA), we know that Medicare, Medicaid, insurance market reforms such as guaranteed issue, and delivery system reforms such as accountable care organizations look

safe. We know that the private insurance coverage reforms – insurance exchanges, premium and cost-sharing subsidies, the individual mandate – are at risk and in danger even though they dodged full repeal with the AHCA’s demise. And we don’t know the fate of the ACA’s many tax increases. Let’s view these systematically.

The intellectual force behind the Republicans’ health agenda was not President Donald Trump, but House Speaker Paul Ryan. Over the course of 2016, Ryan articulated a broad and ambitious agenda, starting with his “Better Way” health plan released last summer. Shortly after Trump’s surprising victory, Ryan threw five hefty balls up in the air aiming to revolutionize American health care:

It was an ambitious agenda for sure. Best to consider the five in reverse order.
Ball #5: Ryan’s exuberant targeting of Medicare was met with dead silence from Senate Republicans – only Senate Minority Leader Chuck Schumer gleefully encouraged Ryan to “bring it on.” By December, talk of Medicare reform had ended and Ball #5 had dropped off the field.

Ball #4: Limiting the ability of employers and workers to have their health insurance premiums non-taxable had been an obsession of former Senate Finance Committee chairman Max Baucus during the ACA creation in 2009 until then-President Barack Obama and then-Senate Majority Leader Harry Reid ordered him to back off. The remnant of Baucus’s design became known as the “Cadillac tax,” a much-maligned back-door device to achieve the same goal by taxing high-premium employer sponsored insurance (ESI) plans. The Caddy tax got into the ACA, and had a real impact in slowing the growth of private spending (though by encouraging employers to increase deductibles and other cost sharing). 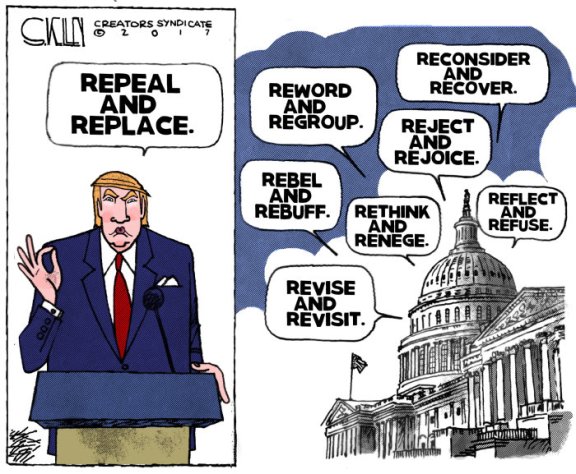 By 2015, pressure from employers and labor convinced Congress to delay the tax’s implementation from 2018 to 2020. In his original AHCA, Ryan tried to take advantage of anti-Caddy tax animus by repealing it, proposing instead to cap employer sponsored insurance tax deductibility. Business and labor revolted, and in last week’s flurry of Ryan amendments to his own bill, the employer sponsored insurance cap was removed, and Ryan proposed delaying Caddy tax implementation to 2025. Now it’s all off the table, and Caddy tax implementation remains at 2020, though pressure for repeal will accelerate. For the time being at least, Ball #4 is off the field.

Ball #3: Ryan proposed repealing all of the ACA’s tax increases that help pay for the Medicaid and private insurance expansions, including new taxes on drug, medical device, and insurance companies, and most importantly new Medicare taxes on earned and unearned income – among the largest tax hikes on wealthy Americans in modern US history. The Coalition for Budget & Policy Priorities estimated that under the Republican bill, the top 400 US families would get an average of $7 million in tax cuts annually, and 160 million families making under $200,000 per year would get zero. Though pressure to repeal the insurance and medical device taxes will continue, the future for all the taxes is uncertain. In immediate impact, Ball #3 fell to ground and is off the field.

Ball #2: Arguably, Medicaid was Ryan’s biggest ball of all, $880 billion in 10-year cuts, obliterating its status as a federal entitlement, eviscerating ACA federal standards that prevent states from rigging their programs to keep poor people off coverage, and scaling back the ACA’s Medicaid expansion so that 14 million Medicaid enrollees would lose coverage by 2026, according to the Congressional Budget Office. In mid-March, when he was confident of passage, Ryan was reported bragging that he had been “dreaming” of wrecking Medicaid since he was “drinking out of kegs” in college. Contemplate that. Though the Trump Administration will use regulatory and administrative powers to undermine Medicaid, the overwhelming threat is over. Ball #2 fell to the ground and is off the field.

Ball #1: This ball, including private health insurance coverage expansions, subsidies, and regulations, is the one still in the air. It’s much less threatened because of AHCA’s demise. Re-engineering the insurance subsidies, as AHCA would have done, is off the table. Yet, the nation’s individual health insurance market that serves some 20 million Americans (half in the government exchanges and half purchasing directly from insurance companies), is shaky with premiums rising at unaffordable rates in many parts of the country, with lack of plan choices and competition, and other problems.

Most health insurance analysts and experts believe that the ACA structure is fixable. During its first three years, between 2014-2016, it performed far better than anticipated. In 2017, with the ill-planned phase out of market stabilization tools called risk corridors and reinsurance, it’s in a rocky period. Trump and Ryan both seem determined to encourage a collapse and blame it on minority leaders Nancy Pelosi and Chuck Schumer. A dangerous period is still ahead.

So much is clearer now than four months ago. Medicare and Medicaid are protected. The ACA’s private insurance structure is more durable than predicted yet still unstable and facing potent political threats. The ACA’s big tax increases seem likely to survive.
Speaker Paul Ryan’s grand ambitions have fallen apart. We don’t yet know what of Obamacare will survive – but the picture is becoming more and more clear.