If you were among the few looking closely, you may have noticed buzz and hoopla this past week on the release of two health reform proposals from Republican presidential candidates Gov. Scott Walker (R-WI) and Sen. Marco Rubio (R-FL). Not surprisingly, while Affordable Care Act supporters were quick to criticize, ACA detractors were complimentary: “serious plans” and “the opening theme music of health policy reform for Republican presidential primary voters.”

So, how do these two plans stack up? Not well.  Here’s a handy table with which you can compare – and I’ve left nothing of out:

First, even for a campaign document, these plans are wafer thin, raising far more questions than providing answers. Walker’s plan has just seven pages of substance, and Rubio’s is based on two short op-eds for Fox News and Politico.

Second, there is nothing new or novel – or risky – here. Both rehash long-standing and safe Republican talking points.  They provide cover for both candidates to lay claim to having a “serious plan” with seeming protection from conservative attacks – though Walker’s plan provoked a strong rebuke from fellow candidate and Louisiana Governor Bobby Jindal.

Third, the plans reflect the Republican Party’s continuing animus toward lower income Americans.  This is most apparent in Walker’s proposal for tax credits based solely on age and not on income. The primary reason Americans don’t have health insurance is income not age – but Walker would provide subsidies to any older person at two and a half times as much as a younger person – virtually ensuring that few of the newly insured under the ACA would be able to take advantage.

Fourth, the plans make no effort to address the rising medical costs. The ACA contains many provisions to address rising costs, from Accountable Care Organizations to the so-called Cadillac Tax on high cost health insurance plans to hospital readmission penalties and much more.  While one can argue whether the dramatic decline in public and private health spending over the past five years is due to the economic downturn or the ACA, it’s clear that the critics’ predictions of an ACA cost explosion have not come to pass.

Fifth, while Rubio makes no pretense of stopping insurance companies from re-imposing pre-existing condition exclusions on consumers, Walker feels a need to do so.  Still, he would only offer protection to individuals who maintain “continuous coverage.”   This means that a consumer with lapse in coverage because of inability to pay — say because of a job layoff —  would become subject once again to pre-existing condition exclusions.  For how long?  Forever?  Walker doesn’t say.  This penalty is actually worse than the ACA’s individual mandate which imposes a one time penalty for each year without coverage.

Sixth, because both candidates would seek entire ACA repeal, their plans would require new financing to pay for the tax credits, the high risk pools and other features.  No mention by either candidate of how they would pay for their plans.

Seventh, in their zeal to repeal the ACA “in its entirety” (Walker), the candidates ignore many provisions that are popular with Americans, for example, closing the Medicare drug coverage gap called the “donut hole,” allowing young adults to stay on their parents’ health insurance plans, providing coverage for clinical preventive services such as mammograms without cost sharing – all of which go in the dustbin under President Walker or Rubio.

Here’s a chart from last week’s Kaiser Tracking Survey that shows how Americans now feel regarding repeal of the ACA. 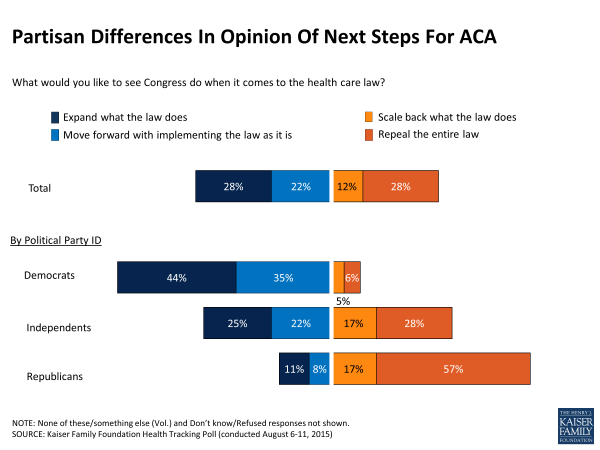 A growing share of Americans want to keep or expand the ACA and reject the position of Republicans for total repeal.  But that’s not the game the Republican candidates are now playing.  For them, it’s all about pleasing the 57% of identified Republicans who want complete repeal and nothing less.

I’m awaiting the release of Donald Trump’s health platform.  The man who publicly admires the Scottish and Canadian health systems will have some explaining to do.  Unlike the other candidates, Trump talks about the need to help folks who can’t afford to buy health insurance on their own — something we hear from none of the others, especially Walker and Rubio.