We had previously  learned in March that an estimated 11.17 million Americans took advantage of private insurance coverage offered through the ACA’s exchange/marketplaces through the second enrollment period ending in February.  Today, we learn that a similar number, 11.7 million, represents the number of low income Americans newly enrolled in Medicaid and the Children’s Health Insurance Program (CHIP) between 2013 and February 2015.  That’s

23.4 million Americans directly benefiting from the expansion provisions of Titles I and II of the ACA.

Take a look at the report released last Friday by the US Department of Health & Human Services with the details, including state by state breakdowns.  Some details:

Of course, if the resisting states had expanded Medicaid, we would see approximately 4 million more already enrolled in Medicaid — they will come, it’s just a matter of time (Montana is only the latest, not the last).

Republican lawmakers in DC, by and large, despise Medicaid — during the ACA debate in 2009 on Capitol Hill, Sen. John Cornyn (R-TX) called it the “gulag” of the American health care system.  They say this in spite of the fact that, these days, most of the 70+ million Americans enrolled in Medicaid get their coverage through private managed care plans.  Oh well, as Governor Pappy O’Daniel remarked in the movie, “O Brother, Where Are Thou,” “there ain’t no accountin’ for taste.”  The Romans, more elegantly, would have said: “De gustibus non est disputandum.”

Here’s something that’s hard to dispute.  More and more Americans are coming to appreciate Medicaid as a reliable and affordable source of health insurance coverage.

If you’re like me — and I pray you’re not — your email inbox drowns every day with news about the ACA and health policy in every imaginable direction.  Sometimes, two messages get juxtaposed next to each other in ways that illuminate a higher truth.  I felt that way today.

First, came an email update from the Urban Institute and their Elevate the Debate project.  Just look at these headlines, all based on newly released data: 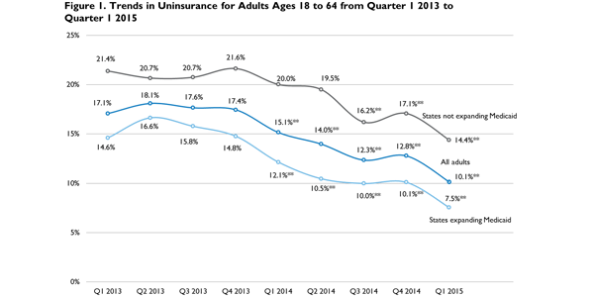 Big things, good news.  I am especially impressed with the drop in uninsurance among adults with chronic health conditions such as diabetes, cardiovascular disease, hypertension, and asthma.  Real progress and something to feel good about.

Then, the next email is from the Blue Cross Blue Shield Foundation of Massachusetts offers a wealth of new data on rising health insurance costs, especially deductibles and other cost sharing, confronting Massachusetts health consumers: Rising Health Care Costs in Massachusetts: What It Means for Consumers.  What it means is not encouraging:

“The impact of these changes in health insurance products can be seen in spending trends, which show that by 2013, nearly one in ten adults spent over 10 percent of income on out-of-pocket health care costs.  For an insured family of four with an income three times the federal poverty level (about $71,000 in 2013), that represents a burden of more than $7,000 per year over and above the cost of insurance premiums.”

Lots of progress and good news, and lots of discouraging trends as well.  The the Blue Cross data only covers Massachusetts, the same trends are in evidence all over the nation, and worse in many other states.  In the polarized craziness of the ACA, the news has to be all good or all bad, with no room for ambiguity or complexity.  That’s not real and that’s not life.

The ACA is responsible for some of the most important gains in social and economic justice in our lifetime.  And, we still have many vitally important gaps to close and gains yet to be made.  That’s reality.

In the five-plus years since the signing of the Affordable Care Act in March 2010, precious little media advertising has been purchased to promote the law and its benefits for so many Americans.  This failure has happened in the context of an avalanche of negative advertising funded by the law’s many affluent opponents.  Hence, one important element that explains the law’s lack of broader popularity.

In the time leading up to the US Supreme Court’s expected decision in late June on the King v. Burwell suit that could eliminate health insurance subsidies for nearly 10 million working Americans, the Community Catalyst Action Fund has attracted some $250,000 in support to launch some pro-ACA advertising with an explicit political pitch and punch.  It will run only a few times during shows such as Meet the Press and Face the Nation.  You can see the ad below:

More important will be the push to get the ad out and around social media.  The point is to help folks make the connection between this abstract lawsuit and their political power.  Let me know what you think of the ad — and if you like it, please circulate it around.  (Disclosure: I sit on the board of the CCAF which is affiliated with Community Catalyst.)

The Gallup organization has become the go-to sources for monthly tracking of progress in reducing the numbers of uninsured Americans.  Yesterday, they came out with their latest estimate that the percentage of American adults without health insurance has now dropped to

11.9%, down from 18%in mid-2013, and down from 12.9% in late 2014.  Because rates of coverage are higher among children, the overall uninsurance rate among all Americans is lower, though no precise estimate is include.

If you look at the chart, it’s unmistakeable that the drop in coverage began with the implementation of the major Affordable Care Act insurance coverage expansions that took full effect on January 1 2014.  Of course, if all 50 states — instead of the current 28 — joined the Medicaid expansion for poor adults, then the rate would be substantially lower, especially with the addition of states with very high rates of uninsured adults such as Texas, Florida, North Carolina, Georgia, Louisiana, and others.

We can hope that 11.9% will not be the new normal for long and that the next new normal will be even lower.  This achievement is a victory for Americans everywhere working so hard to make sure that everyone benefits from the ACA.  Below are some more details — you can see that the expansions are working precisely as intended, and that the groups benefiting the most are those with the highest rates of uninsured: the young, those with lower incomes, and racial/ethnic minorities.

This week, you can be confident that the US Senate will approve bipartisan legislation approved on March 26 in the House of Representatives by an overwhelming (392-37) bipartisan majority to repeal a long-standing feature of Medicare physician payment policy called the Sustainable Growth Rate or SGR.

If you’ve never heard of SGR, you are among the 99%. Still, the SGR story has been fascinating and frustrating since it began as part of the 1997 Balanced Budget Act (BBA) agreed to by President Bill Clinton, House Speaker Newt Gingrich, and Senate Majority Leader Trent Lott.  And as SGR begins its final exit, a host of good and not-so-good elements in the repeal legislation come into play.

What’s good and what’s not so good about this deal?  Well, everything, depending on your point of view.  Here are the leading candidates (and my grade):

So, wow.  Does this augur a new era of bipartisan Congressional cooperation on health policy?  Nope.  Let’s look at each of these in turn. END_OF_DOCUMENT_TOKEN_TO_BE_REPLACED

We see a daily drumbeat of negative news about the impact of the Affordable Care Act on individuals and the economy — see this report on Friday from Fox News.  Rising premiums, loss of full time jobs, bigger deficits, and so much more all tied to ObamaCare.

That’s why I was pleased to see Jason Furman, Chair of the White House Council of Economic Advisors, come out with a presentation and report on Friday at the Center for American Progress detailing “The Economic Benefits of the Affordable Care Act.” Like it or not, we have to keep driving home these facts as often as possible because ACA’s opponents still have the advantage with public opinion.

What are these facts?

For example, many charges that the ACA would cause economic havoc have been disproven.  First, the ACA is not a “job killer” — since the major ACA expansion took effect on January 1 2014, we’ve had the strongest year of private sector job growth, 3.1 million, since 1998.  Second, the

ACA has not created a “part-time job” economy, with employers pushing workers into part-time work to avoid health insurance responsibilities — see this chart from the CEA.  Part time employment has gone slightly down while full-time employment is increasing at the best rate since President Bill Clinton’s tenure.

Meanwhile, we can see indications END_OF_DOCUMENT_TOKEN_TO_BE_REPLACED

I wrote this column for Commonwealth Magazine on the 5th anniversary of the ACA’s signing on March 23.  In case you did not see it, there are messages in here helpful to Americans in understanding this massive policy change.  Let me know what you think.  One correction: the decline in some hospital acquired conditions referenced near the end of the column can be traced to the early 2000s and has accelerated significantly in the past five years.

On the fifth anniversary of the signing of the Affordable Care Act, I ponder how

non-Americans view our momentous and controversial health reform law. Like many US health policy analysts, I get requests from groups outside the US to explain the ACA, or “Obamacare.” I have traveled to Brazil, Australia, and South Africa, and also addressed foreign audiences here in the US, to explain what they should they know about the law and why they might care. I offer them two conclusions, and believe Americans might benefit by knowing them. They are: we remain laggards in providing access to health care coverage, and we are now real leaders in global efforts to improve health care’s quality, efficiency, and effectiveness.

First, when it comes to providing universal coverage and financial protection from the costs of illness and injury, non-Americans have almost nothing of value to learn from us. Even after the ACA’s health insurance expansions are fully implemented by 2016-2017, the US will still have the most inefficient, expensive, wasteful, and unfair coverage system of any advanced nation on the planet.

Long before President Obama signed the ACA in 2010, every other developed nation had established a system to provide universal coverage for all their citizens. Each found its own idiosyncratic path, using differing measures of market and government intervention to align with their distinct economic and political cultures. They all did it better than the ACA ever will. END_OF_DOCUMENT_TOKEN_TO_BE_REPLACED