In the five-plus years since the signing of the Affordable Care Act in March 2010, precious little media advertising has been purchased to promote the law and its benefits for so many Americans.  This failure has happened in the context of an avalanche of negative advertising funded by the law’s many affluent opponents.  Hence, one important element that explains the law’s lack of broader popularity.

In the time leading up to the US Supreme Court’s expected decision in late June on the King v. Burwell suit that could eliminate health insurance subsidies for nearly 10 million working Americans, the Community Catalyst Action Fund has attracted some $250,000 in support to launch some pro-ACA advertising with an explicit political pitch and punch.  It will run only a few times during shows such as Meet the Press and Face the Nation.  You can see the ad below:

More important will be the push to get the ad out and around social media.  The point is to help folks make the connection between this abstract lawsuit and their political power.  Let me know what you think of the ad — and if you like it, please circulate it around.  (Disclosure: I sit on the board of the CCAF which is affiliated with Community Catalyst.)

I have a commentary in this week’s New England Journal of Medicine on “the demise of Vermont’s single payer plan.” Beyond what’s in the article, here are some points of note.

Second, Vermont’s move in this direction in 2011 was the most exciting and important pro-single payer development in a generation at least.  A state chief executive with a strongly Democratic legislature in a small, progressive and compact state — one could hardly imagine a more auspicious opportunity.  Add to that the disappointment among so many Democrats in 2010 that the Affordable Care Act did not go further.  I admit to being caught up in the exuberant enthusiasm. END_OF_DOCUMENT_TOKEN_TO_BE_REPLACED

A new Kaiser Family Foundation tracking poll on the Affordable Care Act is out today showing a teensy increase in public favorability toward the ACA.  The biggest surprise is from this chart below regarding public beliefs on whether the ACA is turning out to be more expensive than anticipated, on target, or less so.  See the results below: 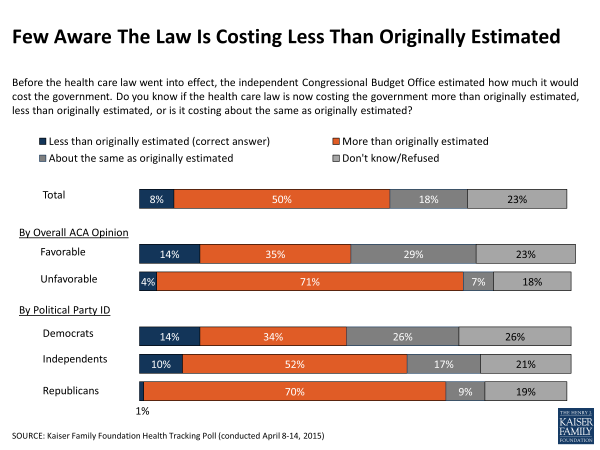 One had to wonder where public opinion would be if Americans understood that the law is coming in as far less expensive than projected by the Congressional Budget Office when the law was signed in 2010.  Maybe not at all.  And certainly, one significant reason the law is coming in as less than projected is because of the US Supreme Court’s ruling in 2012 that the expansion of Medicaid had to be optional, and not mandatory, for states.  The 22 states that have not expanded Medicaid, including the behemoths of Texas and Florida, have played a role in keeping costs down.

Though so has the unexpected and dramatic slowdown in the rate of health spending growth played a substantial role in the decline.  And perhaps, just perhaps, the avalanche of anti-ACA advertising as well as the common assertions by ACA opponents that that ACA’s costs are exploding has had an impact on public beliefs as well.

For the record, the chart below shows the decline in cost estimates of the coverage provisions of the ACA (by far, the biggest cost items in the law).  It’s been a steady decline and far below the 2010 estimates: